They say honesty is best. That being an open book is a good thing. Speak your mind, they say. To share is to care.

I beg to differ.

Or at least when it comes to parenting at 3am.

You see, even the kindest, sweetest and most reasonable of people have the ability to Hulk-out and absolutely destroy their partner with creative and hurtful insults, slurred out of sleepy, foul-smelling mouths at 3am.

It is here, in the inky blackness of your nightly 3am wakeup call, where sharing isn’t really caring, and brutal honesty is unnecessary.

But as it is currently 1:38 on a sunny afternoon, and I haven’t just been woken up by the shrill cries of a hungry newborn (or the rhythmic puffing of my husband’s snoring), I don’t have a good reason not to be honest.

You see, I have been keeping a secret.

It’s been following me around all morning, haunting me whenever I see something that reminds me of my discretion (or discretions, if I’m being truthful). The guilt nibbling away at me with the persistence of a toddler who has come into possession of a too-big, too-hard cookie. The weight of it resting heavily in my stomach.

Before you get all judgmental, you should know, it’s not entirely my fault. How I came into possession of what would prove to be my undoing was innocent enough. A favor, even. Something that would benefit our family, if used correctly. But I got greedy. More than greedy, I became addicted.

At 10 o’clock, on more days I care to admit to, the urge overcame me and forced me to take action. To indulge. “You need this!” my brain would reason. “You deserve this.” And so I listened, never once really thinking about the consequences.

Until today, that is, when standing in front of my stash, hand rooting around blindly to properly hide the bag after getting my fix, I noticed something awful. The bag was empty. Reality set in as I realized that over the course of a few weeks, I had eaten all 20 of the incredibly delicious, homemade breakfast burritos that were given to us (let me reiterate the us part) to help with dinners after the baby came. There was no sharing. There was no caring. There was no honesty in my shameful actions, as I balled the tin foil up and shoved it deep down into the recesses of the trash to hide the evidence. (And if you’re asking why breakfast burritos for dinner, we probably shouldn’t be friends.)

The repercussions of this discovery are three-fold. For one, when my husband finds out, he’s going to be… disappointed, which we all know is actually worse than being pissed. Although he very well might also be pissed, but since he’s probably reading this while pooping at work, there’s not a whole lot he will be able to do immediately, which will give his brain time to think about what he should say, and reconcile it with what he wants to say. The second reason this is problematic is because, hello, I’m addicted! What am I going to do at 10am tomorrow when my body starts calling for the magic elixir I no longer possess? The third issue is nothing can replace what has been recklessly consumed, except more delicious homemade breakfast burritos. My upstanding morals, however, make it pretty clear there is a quota of how many homemade breakfast burritos you’re allowed to ask someone to make you, and I think that number falls well under 20, and is probably much closer to 1.

So why am I telling you all this?

Well I’m not, really. I’m actually writing this as a longwinded and circuitous way of telling my husband, Honey, I ate all the breakfast burritos. It might make you feel better to know that I burnt my mouth nearly every single time. It also might make you feel better to know that in a panic, I even considered going to Whole Foods to buy 20 of those Amy’s frozen burritos, then removing the plastic and wrapping them in little squares of foil to try to trick you. But I did’t because I didn’t want to spend $45 or screw around with our wonky foil.

I know we say honesty is best, but don’t forget how we also like to practice not saying something if it’s going to be inflammatory and dickish. So yeah. I’m sorry. And I’ll do baby duty tonight, without the side of silent sass. 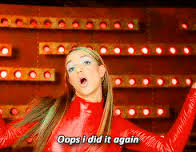 Oops, I secretly ate all of something you wanted again. At least this time I didn’t replace it with a raw potato (though I did consider this).

Let them be children
Discover WordPress