High-five, Cosmopolitan magazine, you’ve really outdone yourself this time. For as long as I can remember, you and your pack of underweight, photoshopped, pop-stars have been haunting check out lines and doctor’s offices, but until this weekend, I’ve never taken the bait. And now? Well now I just can’t stop shaking my head.

Let me explain. Since getting married, I’ve started receiving random magazines in the mail. Latina now comes on a monthly basis, as does the old standby, Redbook. This weekend, a new magazine showed up in my mailbox. One with bright colors and bold promises splashed across a cover bearing the face of a generic 20-something, with multicolored hair and talons for nails.  “LOOK SEXY NOW Make Them OBSESSED With You!” one headline screams at me in pink and yellow font. Correct me if I’m wrong, but isn’t being obsessed kind of a bad thing? “Hot Tips for Hot Lips + Hair + Skin + Nails” reads another. Thank God, because what I need in my life is a ninety-eight hour nap. Oh Cosmo, how did you find me?

For some reason, unlike Latina and Redbook, instead of just throwing it in the basket with the other magazines I am apparently hoarding, I decided to take a little looky loo.

Flipping it open, the first thing that hits me is the smell. What is that smell?! My nose is confused, and is alerting me to dangerous levels of bug spray and rotting fruit. I flip through half the magazine, away from the offending perfume ad, and find myself looking at a page covered in what turns out to be blush. The headline reads: “Q+A Your Burning Blush Q’s”. Immediately I think, who could possibly have a question about blush that would be defined as “burning”? Do people actually wear blush on nights other than Halloween or their wedding? Reading on, I encounter a few blush-related brain busters, with the crowning jewel being, “What if I’ve put on too much?” This question is a “burning” blush question? What do you do if you put on too much blush? Wow. Here’s my “burning blush question”: Have you tried putting on less blush? Or maybe not wearing blush? More importantly, how have you found yourself in a situation where you’ve put on too much blush, so many times, you need to write into a magazine about it? 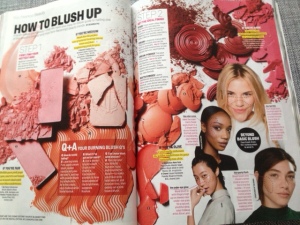 Let me just say, I pity the fool who has to clean up after this photo shoot.

After staring at the page with a look of confusion and concern long enough to start seeing a magic eye in all of the crushed, smeared and spilled blush, I flip a few more pages to an interesting article called, “Hey, Can I Borrow That?” Here, the fine people of Cosmo go through your beauty supplies, and tell you “worst case scenario” what you could get by sharing aforementioned supplies with your friends, who according to Cosmo, seem to be incubators for a number of serious diseases. Here, I learn sharing a razor could give you HIV, sharing a face-cleaning brush (this is a thing?) could give you a skin infection, sharing anything that touches your eyes could give you conjunctivitis, and anything that touches your lips could give you a cold. Okay, fair enough. Since my beauty regime consists of lotion when I remember, and some chapstick before bed, I think I’m all set here. But good to know that the next time my friend asks if I want to borrow her “face-cleaning brush” maybe I should think twice.

Flipping through more pages, at a much quicker pace as my interest is waning, I see what appears to be some sort of drunken clown woman dressed in an oversize handkerchief, attempting to emulate a dying bird. She is perched in front of a window with blinds being blown askew, which reminds me Baby 1.0 has torn down one of the same sort of blinds in our house, and I need to figure out a way to reattach it before our security deposit gets dinged.

Caw-Caw, lady. Have another mojito. 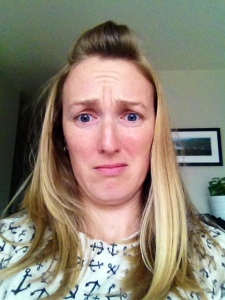 This is my horrifying horrified face.

Obviously, I am no beauty expert. Maybe blush is actually really tricky, and necessary for people who are, like, office clowns or something? Maybe “face-cleaning brushes” are all the rage, and at my next doctor’s appointment they will ask me if I’ve been brushing and flossing my face every day, to which I will lie and say yes. Maybe that drunken bird woman is making an important statement about equal rights for women. These things I don’t know. But I do know, you should not use your toothbrush as a vibrator. Good God. Talk about things you never thought you’d have to say. So thanks, but no thanks Cosmo. No thanks.

All of the images, except for my ugly mug, belong to Cosmo, and all the answers to any of your burning blush questions can be found in the February 2015 issue.

Let them be children
Discover WordPress