I am not a weirdo. Let’s just get that out there right away so nobody has this crazy idea the reason I’ve had difficulty locking down a group of close friends is due to overt weirdness. I’m not a sneaky sniffer of armpits on the bus, nor a coffee-breathed close-talker. I don’t chew with my mouth open, or yell colorful obscenities at unsuspecting bystanders. I’m not a drunken nuisance, unless you count the time in college I tried to steal a mechanical Christmas reindeer from someone’s yard, and ended up barfing on their nativity scene.

Nope. I’m not a weirdo, or at least not in the traditional sense. In fact, I’m pretty darn average. I’m average looking, with a pleasantly average demeanor. I typically make friends with average ease, and maintain my friendships with the average amount of kindness, loyalty and respect one would expect from a true friend.

Yet for some reason, since having a baby, I have had more trouble finding a group of close friends than the victim in a slasher film has not falling down while running away from the aforementioned slasher.

This isn’t to say I haven’t met any friends. Over the last two years I have been lucky enough to cross paths with a couple incredible women who absolutely fill my cup, and whose friendship I appreciate with every fiber of my being, but I just thought making friends post-baby would be different. I thought it would be easier. I thought becoming a mom would break down barriers between women, and automatically bond me with anyone else who was a mom because we both sublet our stomachs for nine months. I naively pictured my motherhood friendships being like those portrayed in the Devine Secrets of the Ya-Ya Sisterhood: Women who were so close, they could drug and kidnap your adult kid when she was being snotty, just to prove to her that her mother wasn’t the monster she made her out to be. Or at the very least, women who didn’t feel the need to shower or clean their house before inviting me over for a spur-of-the-moment, guilt-free 3pm beer on a day one (or both of us) were struggling. 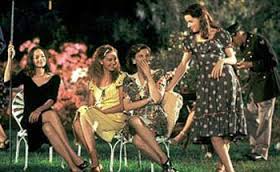 “You just drug her. It will be fine. Then she won’t think I’m a monster! It totally makes sense!”

But this perfect posse of procreating women alludes me, and I can’t help but wonder, why?

Did I miss the turn to the notorious “village?” You know, the one where everybody helps raise the kids? Did the decoder ring that would grant me access to the I Just Had A Baby So Let’s Be Best Friends Club get lost in the mail? Is there a secret handshake, or a gang sign that was described in the baby care booklet the hospital sent home with me, outlining how to communicate your allegiance to the Parental Posse from across the park? Or, am I actually a weirdo?

Of course I can recognize this is a multifaceted issue. Exhaustion, impossible schedules, (nonexistent) naps, jobs, spouses- it all plays a role. But I can’t help but wonder if something we have control over, namely how we choose to label ourselves, is factoring into how difficult we make it to bond with other women. Labels can be helpful, but labels can just as easily lead to judgement and divisions. We identify as baby wearers, and La Leche Leaguers, SAHMs and CEOs. We are single moms, and working moms, “traditional” moms and moms married to moms. We are “natural birthers” and C-Section survivors, attachment parents and free-range “criminals” if you believe the state of Maryland. These labels don’t define who we are, but rather just a small piece of the puzzle that makes up our full story. Can’t we look past everything else and focus on the common thread we all share? I mean, what parent doesn’t have an EPIC poop-up-the-back story they are just dying to tell? 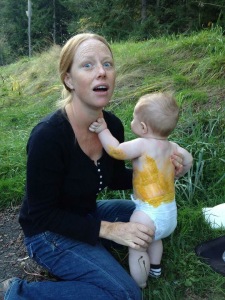 Like this. Who doesn’t want to talk about this?

It’s easy for me to withhold judgement and listen to what someone else has to say behind the anonymity of a computer screen. It’s much harder to do this in person, I get that. But it can be done. So I will keep trying, in hopes of one day nailing down a posse of fellow non-labeling, open-minded, semi-awkward-but-not-full-blown-weirdo ride or die moms, who, under the necessary circumstances, would drug and kidnap my adult child to convince her I wasn’t a monster. Now who’s with me?

If you’re interested in learning more about moms supporting moms, and changing the course of the mom wars, check out #mommitment on Facebook, Twitter, and the blogosphere, or read about it from Julie at Next Life, NO Kids. Let’s work together to spread love and support, and end negativity towards each other.

Image credits: deer, Devine Secrets of the Ya-Ya Sisterhood, Poop up the back belongs to HMDHM. Cover image.

Let them be children
Discover